Have you ever considered making your daily commute to work by bicycle rather than by car? If so, then please hold that thought! The benefits to you and the environment will be substantial. If you rode a bike to work only one day a week, you would reduce your travel-related environmental impact by 20%. That’s the equivalent of the reduced carbon footprint from buying a hybrid car, only at a far lower cost. Rather than jostling through morning traffic (I know, it’s Ashland, but we do have traffic snarls nonetheless), how would you like to be cruising along, enjoying the sights, sounds, and smells of the new day? Yes, its a wonderful alternative vision for commuting, but what about the disadvantages? Well, let’s look at those and see how the advent of the electric bike is the solution to most of them.

The first complaint people have when considering biking to work is the idea of arriving hot and sweaty at the start of your day. With an electric bike that’s simply not an issue anymore. The assistance of the motor means you’ll be working far less at the pedals to get from point A to B. Do you have sizable hills along your daily route? No problem, an electric bike “flattens” hills into an easy ride as well. So, take it easy in the morning to keep your ‘freshness factor’ intact, and then on the way home, if you want to push it some more to get a bona fide workout, go for it.

The next concern is not having the time to devote to riding instead of driving. On an electric bike that’s usually not the case either. Quite often, friends and I will travel from one place to another in town – myself on my electric bike and they in their cars. I’m almost always the first to arrive at our next stop ahead of them. Following all the rules of the road and utilizing bike lanes/paths I can traverse town faster, park my bike right in front of our destination, and be inside getting comfortable before all the car-parking-drivers come through the front door.

The third biggest concern about an electric bike is the cost. A quality electric bike will cost anywhere from $1600 to $7000, with the majority falling somewhere in the $2-$3000 range. “That’s a lot to pay for a bike.” some say. Have you been in a regular bike shop and looked at prices for the better bikes they offer? Have you priced a new or reliable used car lately? Suddenly, an electric bike looks like a bargain in comparison. How about operating costs, maintenance, and insurance? It costs about five cents to fully charge an electric bike, and that charge will take you anywhere from 15 to 50 miles depending on the bike. Did you get that? One nickel for up to a week’s worth of riding. Maintenance is no greater than a regular bike, and insurance or licensing is not required. Now that’s affordable transportation!

So, don’t you think its time to reassess your daily commute? Wouldn’t you like to become part of the solution? Our addiction to fossil fuels must end, sooner than later. We can make a difference, however seemingly small… one bike at a time. Come join the two-wheeled revolution!

Co+op Basi¢s Gives You More Ways to Save

What is Essential is to Be of Service 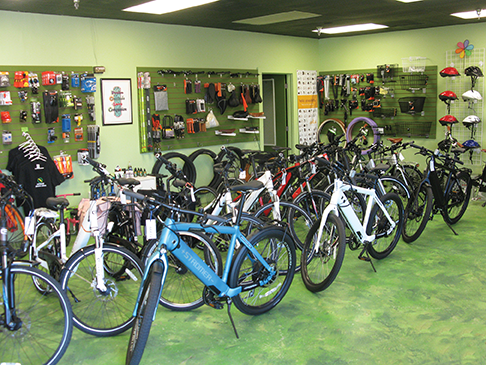