Kurt Mottram has been a friend of mine for about a year. Kurt is a dedicated artist and intellectual who has managed to live on the fringe of society by selling his drawings or the occasional painting. He is a treasure hunter and collector who often sells what he finds. Kurt has an impressive knowledge of collectibles as well as world history. He often surprises me with minute details and dates from the past, as well as information about ancient cultures. It is as if his mind is a vault from the epic story of Man.

Kurt Mottram has a keen eye for detail. I noticed this when interviewing him in his trailer at the Wellsprings mobile village outside of Ashland Oregon. Everything in his trailer appeared well kept, with each thing in its proper place. I noticed on his small bookshelf, standing uncluttered and free of dust; the epic works of Tolkien as well as a few books about popular music Icons.

His mind for music is immense. Musicians have inspired over 100 drawings he calls his “Musician Series”. Greg Allman to Frank Zappa, they are all there; sometimes two or three times.

You may have seen Kurt’s work at Bloomsbury coffee shop or at Evo’s. He often appears with a smile and a glimmer in his eye, wearing hand painted clothing that reveals the inside life of this outsider artist. Kurt Mottram is the real deal. Someone who is an artist to the core. Someone who has not sacrificed their ideals for what mainstream culture says is “O.K.”. Someone who knows what they are worth despite what others say.

Kurt says his new body of work “pleases him” and he terms it “Organic Visual Poetry”. The “shattered glass/stained glass/ persian carpet effect” he gets with his epic paintings are result of many years of painting and experimentation.

Kurt’s next show opens at the MAda Shell Gallery on the plaza in Ashland Oregon on May 30th from 5 – 9pm. You may also join us First Friday from 5-9 as well. 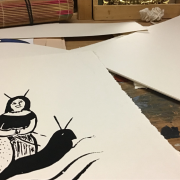