The housing market is picking up steam and sales have been strong in Ashland and Jackson County. I’ve said to those who have asked me if we had hit the bottom of the market that the only way we would know would be 6 months to a year after it happened. According to the numbers, I would say the bottom occurred in the summer of 2012, although it could be easily argued that it was the summer of 2011. We have a full year of a strengthening market under our belts, so it is a good time to look at the numbers.

The number of sales in May and July of 2012 in Ashland was 83, whereas the same period in 2011 was 62. That number increased to 100 sales in 2013. That is a 40% increase in the volume of sales in a 24 month period. The final number I will throw at you is the absorption rate (supply vs. demand). In the 3 month period stated above, an average of 33 houses per month sold. There are 230 houses on the market. If no new houses came on the market, and houses continued to sell at the same rate, there would be no available inventory left in 6 months. Common wisdom states that a 6 month supply of housing is a stable market. Less than 6 months is a seller’s market, more than 6 months is a buyer’s market.

There are buyers out there looking, and sellers are feeling that the market is healthy enough to sell. Those looking to move up or downsize feel the ability to do so. If there is one thing the last 10 years has taught me, it’s that anything can happen. All we know for sure is what is going on today, and we must all make our best decisions based on that point in time reference.

Article Contributed By:
Adam Bogle ‘the’ Agent In A Kilt
Broker at Coldwell Banker Pro West in Ashland
President of the Southern Oregon MLS 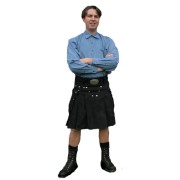 As Stated In The Locals Guide: You know you are in Ashland if your real estate agent wears a kilt. Now, the fun begins. Where is the secret agent in a kilt? Play the contest in the next issue of the Locals Guide. Send replies to: secret@agentinakilt.com

Help Along the Way…

Getting Ready To Buy a Home?

Qualifying for a Mortgage