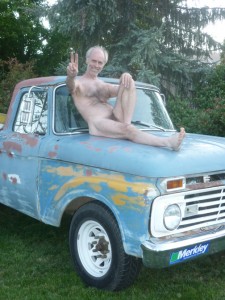 Scott Brown posed nude for a girlie magazine and then became renown for driving a pickup truck.  The Reverend Brad Carrier combines both.  The truck is a 1966 (mostly) Ford 3/4 ton pickup.  It has a custom paint job of five colors added over the years, plus surface rust. Brad replaced the original engine with a 390 V-8 from a police interceptor and a 4-speed transmission from a junk truck of the same vintage from his friend Jim’s farm in Butte Falls.  It’s a classic workhorse, strong and reliable.  Always starts and runs.  Carries lots of weight (Brad also builds rock and boulder dry-stack retaining walls).  However, it gets horrible gas mileage, and so, unlike Scott Brown who uses his truck as a general vehicle, Brad only uses his for hauling lots of weight or big objects.  “It is unethical to waste more fuel than we need to,” Brad preaches.  Instead, he uses a small car, or better on the MPG, his Kawasaki 440 motorcycle, or best, his bicycle.  Brad isn’t a senator (yet) but is “going with American’s preferences” in case he wants to be one.  For now, he’s happy with Oregon’s two senators, but he’s laying the groundwork in case he decides to run.  (Note the bumper sticker, which has become his truck’s name.)