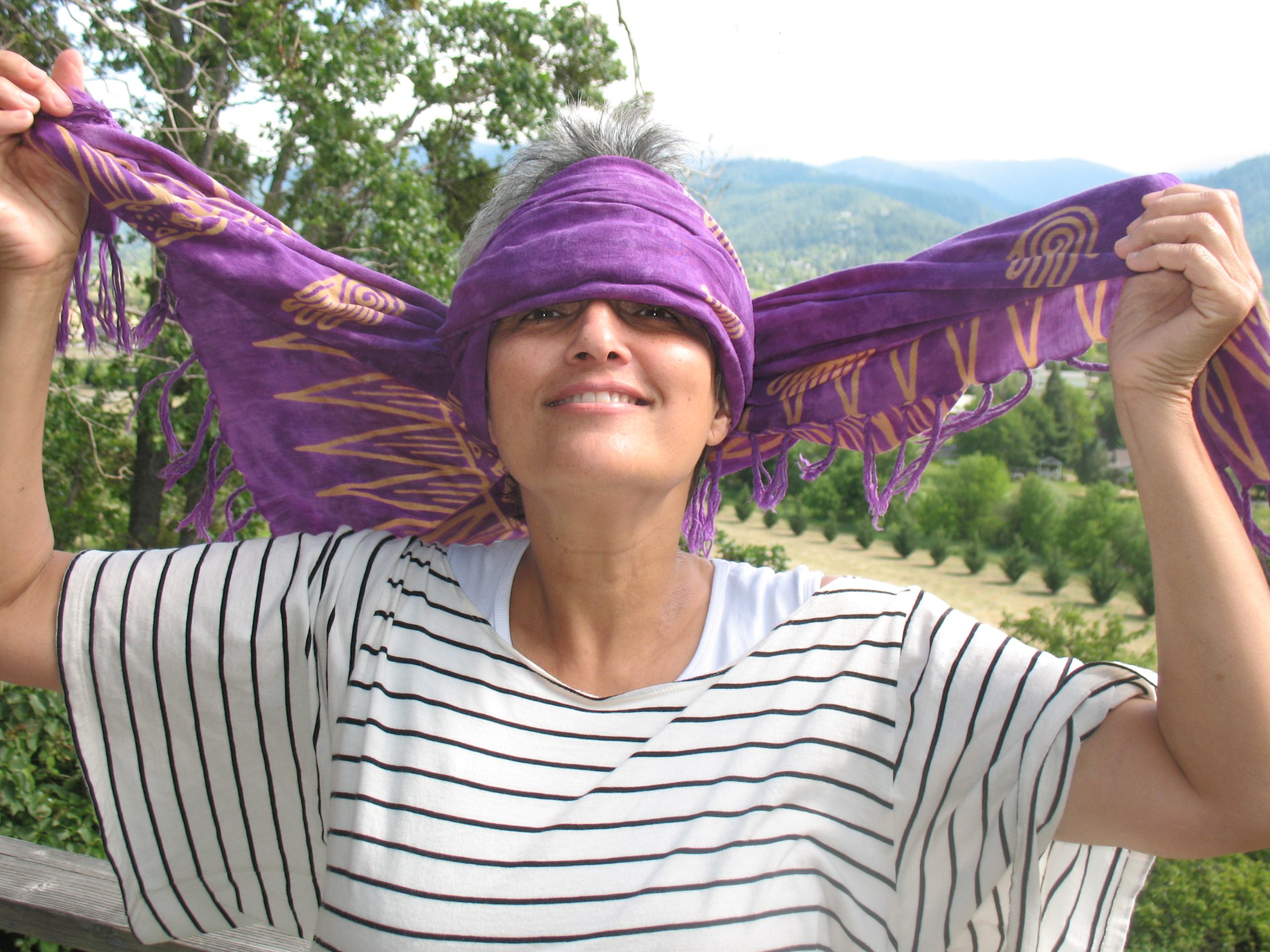 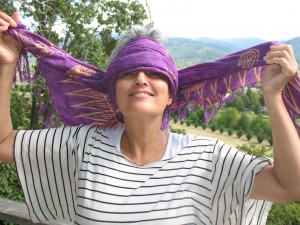 When I first met Isabelle through her work at The Language Spot, I had no idea she was one of those rare multi-talented individuals, a modern day rendition of the “Renaissance man”. I soon learned that in addition to being a French teacher she is also an accomplished artist and actress. I last saw her work at the Ashland Art Center and was struck by the wonderful colors and whimsical nature of her paintings.

What brought you to Ashland, and more importantly, what has made you stay?

Isabelle: After visiting Montreal, Canada, I went to New York City where I met my husband to-be Peter Alzado. We lived for five years in the Big Apple and decided, after some detours, to come to Ashland to raise our children in a safe, beautiful environment. Ashland was also a town to explore the theater and artistic possibilities. We built a house in the mountains and it was perfect for the family – We stayed because Ashland offered good schools, theater opportunities and was beginning to develop into this rich Mecca that it is now.

What part of France are you from?

Isabelle: I was born in Paris and lived near Montmartre, the charming district of the painters – Maybe this rich, fun exposure to these painters tickled my already born interest in art. During that time, I got involved in many groups – (Martial Arts/ humanitarian projects/ Red Cross etc) And after receiving my baccalaureat, I studied and performed at the Theater de Paris under the direction of Bob Piatte – who had been a student of René Simon au Conservatoire de Paris – At times, I combined theater and drawing, becoming responsible for costume design. Later, we formed a company ( CREERA“ Centre de Recherche et de Realisation Artistiques) taking residence at Le Chateau de La Forêt à Chaon, in the Loire region where all the beautiful castles transpire French beauty and history. There I lived and completed my training as an actress and artist working with this company of 15 actors dedicated to bringing the French Classical theater and Science to the rural areas of France by touring, performing and displaying graphic exhibits of science related subjects-

So I was involved in both projects: was on a stage under the stars at night and exhibited during the day the panels that I had made with the help of scientists. During the winter months, I usually stayed at the castle, busy learning “l’Art Culinaire”, continuing my training as an artist in the company of the old masters, reading the required 2000 French theater books in the castle library and spending hours in the attic restoring old French frames and lithographs with self taught medicine…You know, those potions that explode when no one is looking!… I would also take long walks in the forest by the lake.
These nearly ten years at the castle were enveloped with a sense of magic between nature, visual arts, music and the theater. It was a harmonious, rich experience forever imprinted in my spirit.

What do you miss most about your native country?

Isabelle: I miss the city’s gifts, beautiful Paris, the late night cafés, people, the architecture, the streets, the roofs, the walks at random, the rendez-vous with friends filled with the ever flowing of the language out of my lips! My daughter, Jazmine, went to Paris this early summer and asked with her lovely humor : ” Mam, tell me again why did you leave..?
I miss my Frenchness – my French identity – my French reactions – the other “me” mon autre moi.” Not the same Isabelle here and there. I miss being there!!

I also miss the South of France and the countryside so much too – As a child, I used to spend the summer in the country side, becoming a farmer helping with the hay stacks or the milk cows! With my favorite stick and two dogs, I was asked to walk the cows to the field, hours away, following dried, dirt roads, and watching all afternoon frogs by the creek’s destination, or lifting some lost moss on rocks or greeting flies and bees buzzing around. I would count how many times the cow’stail swiped at that fly and I would learn repetitive patience. But my real job was to make sure that I would count the same number of cows before my return to the farm … Left alone for hours, childhood took care of me and invited me to discover from the first minutes, mysterious bugs to the huge under belly of a milk cow! I miss the scents, the little paths, the field – these paths, this grass, this musky smell – and the back against a tree- not my back now but my back then, bent with curiosity, or straight up with delight at the sun’s orders. It could have been anywhere, yes, but it was in France…

I once found a big box of hats in the classroom! What was up with those?

Isabelle: I was, at the time, teaching a French improvisation class at Oregon Stage Works for Inter/Advanced students in French – and I often had a big box of hats! .. Each student would pick up a hat and would become a new French character – They would group by 2 or 3 and make up a story. It is extraordinary to witness the range of imaginative dialogues that emerge from a new shape on someone’s head! How a hat invites for a new persona with a new speech and a new story to tell – At once, the French actor took on an entire new identity – It was wonderful, creative and funny! So I brought “my box of identities” to The Spot Language knowing that the students would have fun – And I think they did…! :)

You often bring theater into your TLS French classes in the form of role-playing. But you also teach another class that goes even more in-depth into acting. I think it’s called French Improvisation. Can you talk about that class?

Isabelle: Yes – For this class, I basically combine my theater training with the French language. Through theater games and improvisations, the students warm up to confidence and are able to imagine, create some dialogues based on given guidelines. It was very successful and it increases levels of fluency – I will teach this class again through RCC Higher Education program this coming fall.

With all the things you do, how do you find time to make art? Do you have a schedule that you abide by, or do you just decide on a day-to-day basis?

Isabelle: I work as time and inspiration allow. My art is entirely imagined, centered on emotional themes- to say it better; even my imaginary landscapes come from an emotional state of Being. I usually work fast – It is as though an emotional impulse drives me to my colors – my eyes and spirit in some intuitive experience. My silences begin to move and want to be born in lines, colors – chaos or order – all is invited – A certainty, a sureness lead me. It is the dance, the ambiguity between what I do not know and what I know. A quiet tickle with a gigantic creative hand. Except it is my hand – my fingers – I often leave the brushes in their ceramic vase my son gave me as a gift. They watch – alert – ready to pounce at my first signal.

What is your next theater or art project coming up?

Isabelle: After returning to the stage performing the role of an Israeli woman at Oregon Stage Works, under the extraordinary direction of Peter Alzado, the desire to act more on stage excited me again- Like an old friend, that desire revisited me – and so, I would like to perform more and I hope to have the time to work on audition pieces – And I also continue to paint and I am currently exhibiting in a new space in Ashland (258 A street suite 11 above the Metaphysical library.) Come and visit on first Friday! My other work is in Medford at Yesterday Blossoms- I am usually there on 3rd Friday.
Regarding some projects, I have some lingering ideas: Some artwork about my African background, or my emotional memories of Paris, or some watercolors about tango dancers ( I just did one )… I also would like to create a compilation of my poetry with artwork – A project that has been haunting me for years… And I am also listening to those paintings and projects that are still hidden in me.. :)

I also would like to develop a new collage class dealing with themes of transition – Let me know if you are interested ? I also enjoy translating and there may some opportunities in the near future.

Voilà ; my little crumbs spread out in the streets of Ashland and the mountain where Peter and I are presently moving back. Ciel, our wonderful son is joining us for the summer, resourcing his spirit, studying and working. We are so happy to have him with us and we delight in his brilliant mind and sense of humor. :)

Isabelle Alzado is a certified Waldorf educator, studied Art Therapy in New York City and Eugene Oregon and graduated Phi Kappa Phi with a B.A. in Art from SOU. She is member of the Art Center in Ashland and is currently showing her work in Medford at “Yesterday Blossoms”- and in Ashland, 258 A street suite 11 upstairs. On stage, her most credited show in the USA has been Shakespeare Henry’s the V opposite Christopher Plummer at the Shakespeare Festival -Stratford Connecticut. She has been teaching art for many years in the Rogue Valley, and enjoys very much working for The Language Spot, an emerging language school – much needed and welcomed in Ashland – She also has her faithful, fun, wonderful group of dedicated French students with whom she meets privately –