For our native white and red oaks, a half century is but a mere chip shot. When I reflect on the thousands of removals over the course of my career, the average age of trees in a landscape setting I’ve removed got about 30 trips around the sun before I punched their ticket.

What, you may ask, are the reasons for such a short “lifespan?” It wasn’t due to old age, mind you, just a lack of resources. As we tweak an organism, we modify its life code. We want color, or form, or a specific variety, so we graft for example what we want onto what we’ve got. Graft refusal over time is a big contributor to tree failure. Another reason for such short lifespans among landscape trees are simply shortcomings in the planning concerning natural expansion of the organism itself. How many trees around town still have the drip emitters right up against the base of the stem when the root system was off and running decades ago? Damn near all of ‘em, and so easily modified it is just a shame! The third but not final nail in the tree’s coffin will be lack of space. This may be due to infrastructure such as overhead or underground utilities, sidewalks, curbs, etc. A tree that stops growing is dead, and so it goes that running out of room seals its fate.The old adage of  “right tree, right place” falls on deaf ears to this day. Another malady among urban forestry is purely environmental. Some trees just aren’t wired to the factors they are subjected to, or protected from. How many stems have a sunscald racing stripe running up the stem on the southwest side? Not just a condition that inhibits vascular flow within the mainstem, but also a huge court for infection into what was supposed to be a sealed system.

And finally, we get to maintenance issues. This could be anything from over pruning, or even pruning at the wrong time, to just plain old crappy cuts. More than a few trees would have lived a lot longer if they were never pruned in the first place!

Some trees just last as long as they last for whatever reason and we just have to accept this as it was worth the 30 some odd years of color, and birds, of sounds and smells, of shadows and fruit.

“Hey,” you can say, “We had a good run,” and make another pilgrimage to the nursery, that is just fine as well. Nursery visits are a splendid way to spend the day!

My best advice for planting will always be to consider water, elements, temperature and space. Soil volume and adequate drainage are essential considerations not to be ignored. Proper maintenance will go a long way to ensure longevity, so having a competent arborist on speed dial wouldn’t be a bad idea either. If you see a mature tree you just fall in love with in town, do a little “digging” to expose any negative attributes that specific tree in that specific space may have before adopting one of your own, lest you beget someone else’s problem that isn’t obvious to the casual observer.

As always, plant high and often, and enjoy our beautiful autumn! 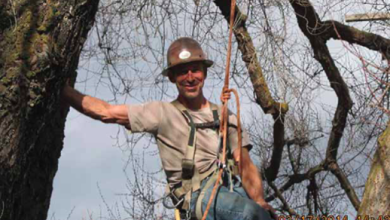 Casey P. Roland Tree Care – Out On A Limb 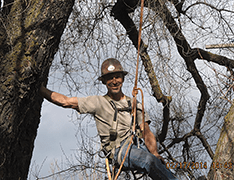 Eye To The Sky…