Fresh off a tour with Train and Michael Franti their coming to our town!

Inside Story of the Novelists
by Jeri Chadwell-Singley

The guys stopped to snap a selfie while at 102.3 the Max in downtown Louisville, Kentucky. “I miss my dogs, but quite frankly I would stay out another month happily right now—I’m on Cloud Nine, Joel Ackerson—vocalist and mandolin/guitar player for the lyrical rock group the Novelists—said during a recent phone interview.It was the afternoon of March 4, and Ackerson and his three bandmates were preparing for a house concert in a suburb of Chicago—the second-to-last stop on a six-week national tour. The band has had a healthy following since its 2012 debut album, Backstory, but its members still have a fondness for playing shows in intimate, private settings.”What happens when you get into a small room is each audience member realizes how crucial they are to the show—being resonant, if you will,” Ackerson said. ”And when that happens, and you get 20 or 30 or 40 people really turning on to their involvement in the show it creates this cycle of connection.”Just a few weeks earlier, the band had boarded a cruise ship in Florida and set out on the Sail Across the Sun Cruise. This annual music festival on the open seas features concerts by Train and a host of other musicians, including some each year who’ve won their passage through popular vote,”This cruise was really … beyond our wildest dreams,” said vocalist and keyboardist Eric Andersen. ‘We got to see some of our heroes play. Glen Phillips was on the cruise—from Toad the Wet Sprocket.’But the bandmates got more out of the cruise than just the opportunity to play gigs on the same stages as some of their music idols.’There was a lot of camaraderie between the bands. and I didn’t really expect that seeing as we were the new band: Andersen said. We won our way onto the ship, whereas these guys were booked with major label acts. And yet they treated us like peers the whole time. There was never a disconnect:The guys made plenty of new friends, too. Staying in touch with fans is something the band members pride themselves on. The archived pages of their website read like a book, with chapters of dialogue spanning years of updates about shows and recordings. And the Novelists is a band that records a lot.’We’ve sort of functioned as a studio band for a handful of different musicians,” said vocalist and bassist Zach Teran. ”Even when we’re not recording our own songs, we are writing and producing, and [we] help record a ton of other people’s music.”After returning from the cruise. the guys made their way north from Florida for the release of an album they produced with Baltimore vocalist Heather Aubrey Lloyd. For drummer and vocalist Justin Kruger, the Baltimore show was a personal homecoming,I’ve been living [there] for the last almost four years while my wife is in a pharmacy program,” Kruger said during another phone interview before the show, “It’s really special to be showing up in a car and showing the boys where I live.”Now, the bandmates are preparing to bring the tour to a close with a show at the Brickroom April 7th Ashland Oregon. “We’re thrilled about playing around .., because we’ve been tightening up all the music,” Andersen said. 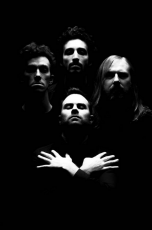