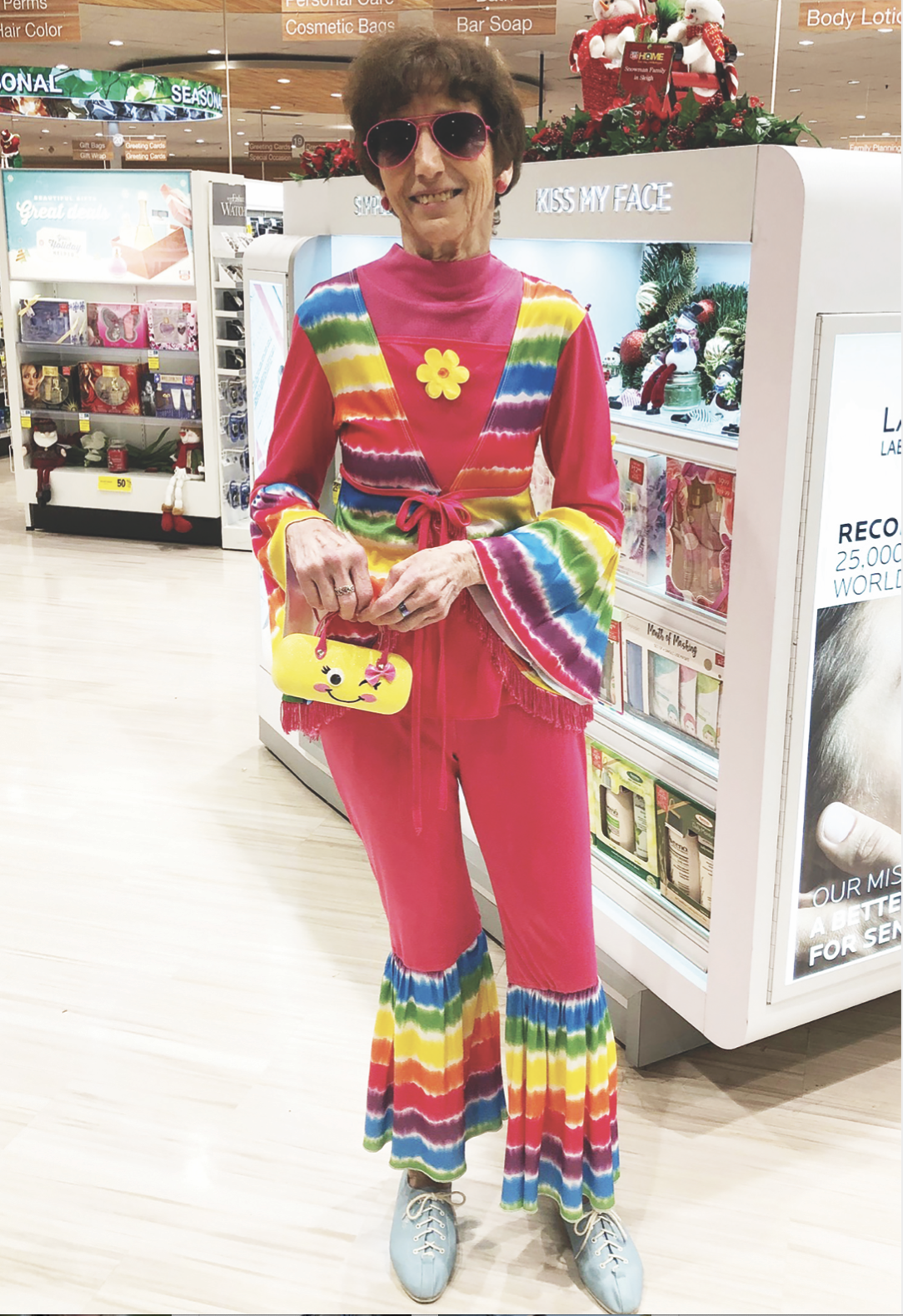 Many residents of South Ashland enjoy their acquaintance with Lola Zinn, but how many of us really know her? Typically, most people aren’t too excited about running errands to the post office, but here’s a special lady in our community who makes it her minute-to-minute mission to uplift the people she welcomes to her counter at the RiteAid Postal Annex.

People who know Lola know she’s a person who truly goes above and beyond to be kind and of service. And you can see it in her from a mile away. I called Lola and invited her to be interviewed and she said, “Well no one’s ever asked me before, but sure, I’ll do it,” which delighted me of course, and we set a time for the next day during her lunch hour. Lola invited her friend and boss Marla Lumsden to help her elaborate on these answers, which I appreciated since I knew that Lola’s innate humility would limit her from expounding on her character strengths, and I knew right away that she and Marla had a special bond.

“Lola, I’m so pleased you accepted this invitation to introduce yourself to the community some more, thank you. Let’s start with a really basic question please; where did you grow up?”

“I grew up in Des Moines, Iowa. My Dad was a doctor, so we moved a lot, and I lived in several different places when I was young, until I moved here 41 years ago, to Grants Pass. Sacramento before that for ten years and I hated every minute of it. I’ve lived in Medford for 28 years now. And I’ve worked for the same company for 51 years, since leaving Iowa,” Lola said.

I asked Lola what the best part of her job was. She replied with a friendly laugh saying, “Besides my boss here Marla—it’s the people. I love the people, they’re all really nice. I’m a people person, and I haven’t met any bad ones yet. People are always bringing me things to show they care; holiday turkeys and theater tickets, pillows and scarves. Look, a customer brought me this ceramic vase the other day that he had made.” Then Marla added, “It’s incredible. She may not know everybody’s name, but she knows their box numbers!” “Haha—well it’s true you know, that I’m good at remembering,” Lola said.

Regulars at Lola’s counter know she’s a crafty holiday decorator, so I was curious when I asked, “You always make holidays fun, Lola—which is your favorite?” “All of ‘em,” she said immediately with a chuckle. “I love dressing up for Halloween. One year my costume was a mail order bride, with a long white wedding dress, white nurses’ shoes, and all covered in stamps from around the world. I keep a box in back here with a plethora of decorations for all the holidays.”

I asked Lola what her proudest accomplishments have been, and without hesitation she said, “Raising my kids. I have three children; Kimberly, Everett and Robert. And my adopted daughter here Marla, too! The youngest!” We all laughed, then I asked timidly, “any grandchildren?” “Oh yes, ten grandchildren. And nine great-grandchildren already,” she answered with distinct pride.

Next I asked, “What’s an interesting or surprising thing that people wouldn’t guess about you?” With Marla’s help, I learned that Lola is a bingo champion, a huge Green Bay Packers fan, and that she keeps out of the sun; so naturally her favorite time of year is Spring and Fall. Lola’s birthday is April 3 making her an Aries. Lola’s least favorite food is Brussels sprouts, but she was quick to tell me, “I’ve tried them, but I don’t like them at all. You can’t say you don’t like something until you’ve at least tried it. I like cabbage though!” Laughing playfully, Marla then opened a drawer under Lola’s desk revealing a large stash of snacks and sweets. “Look here, Jordan—this is Lola’s ‘Grandma drawer’!”

Pet lovers might assume Lola is a cat person, or maybe has a little parakeet? A goldfish? Nope—her canine companion is Tonka, a giant Pit Bull Terrier, whom she adopted unexpectedly and adores. Although any burglars “would only get licked to death” she laughs. Marla confirmed that Tonka is wonderful for Lola and told a story when the two of them removed a tick from Tonka, all rolling around on the carpet together.

We talked for a bit about the September 8th Almeda Wildfire tragedy and all the people she knows who have been affected. Lola said, “My heart cries for them. You know it hurts, it hurts. And I’m glad the people are ok, you know, that they got out. That’s the main part. I couldn’t even imagine what all those poor people are going through. When I go home now, and I look around my house at all my pictures, I get to thinking, you know; what if I lost all this too. I couldn’t even imagine losing them all.”

Marla continued her praise; “You know Lola takes everything personally, so when her customers hurt, or one of them passes away, it affects Lola personally. There isn’t a customer who’s lost someone that she hasn’t sent a card to, or a gift, or a personal note.” Marla makes a gesture towards the rows of mailboxes behind us and says, “She takes all of these guys personally.”

“With so many grandchildren and great-grandchildren, Lola; what advice do you have for the young people in our community?” “Well, you know I hadn’t thought about it really.” She paused for a long moment and then said hesitantly, “Sometimes they seem like they don’t want to work. Some of them, not all of them of course. They want money and they want to do stuff, but they don’t want to show up. But just some of them, not everybody,” she emphasized. “I could be wrong, but I know what my parents taught me, and what I taught my kids, and my kids have always worked. And they go to work when they’re supposed to go to work,” Lola said in wise, great-grandmotherly style. Then Marla said, “What Lola’s trying to say is they just need to ‘man-up’!”

Toward the end of our interview, while Lola was feeling more comfortable with me, I ventured this next question, sheepishly: “What are the most annoying or frustrating things customers do?” (As a regular, I was asking her knowing that I’ve likely made infractions myself.) Marla spoke before Lola could; “Lola doesn’t get annoyed. She really doesn’t. She keeps in her bubble.” Not satisfied yet, I pressed Lola again and she said, “Oh nothing I can think of,” she maintained. “I just really like people and enjoy serving them.” I pressed her once more and she finally confessed, “Well, sometimes people get cranky waiting in line.” (I cringed, feeling my guilt.) Marla interjected again that she and Lola have had to actually “break-up fights” in the line sometimes.

My next question was a little bold. I asked her, “ok, Lola—here’s a little challenging question for you maybe. Is there something about yourself that you’re working on improving?” She paused only just briefly and then answered confidently and definitively, “I love right what I’m doing. I don’t see anything that would make me better. I mean, I don’t see anything I’d like to improve, I like me just the way I am. Simple. I’m just an old simple person. My parents taught me well.”

Marla couldn’t contain her gush of examples: “Yes, she’s a very simple person. She doesn’t want Wi-Fi, she refuses to do online banking, ha!” “Yes, and I still write checks too!” Lola said. “Yeah, and she even balances her checkbook,” Marla continued. “And if she needs something off Amazon, I’ll order it for her. If you gave her an old rotary phone, she’d just be so happy. And that’s the way she likes it!”

She is probably the least materialistic person I’ve ever met in my entire life, that Lula-Bell! And she’s been blessed with the greatest family,” There was a brief silence and then Lola said quietly in a lighthearted voice that made all of us laugh; “well, on some days!” 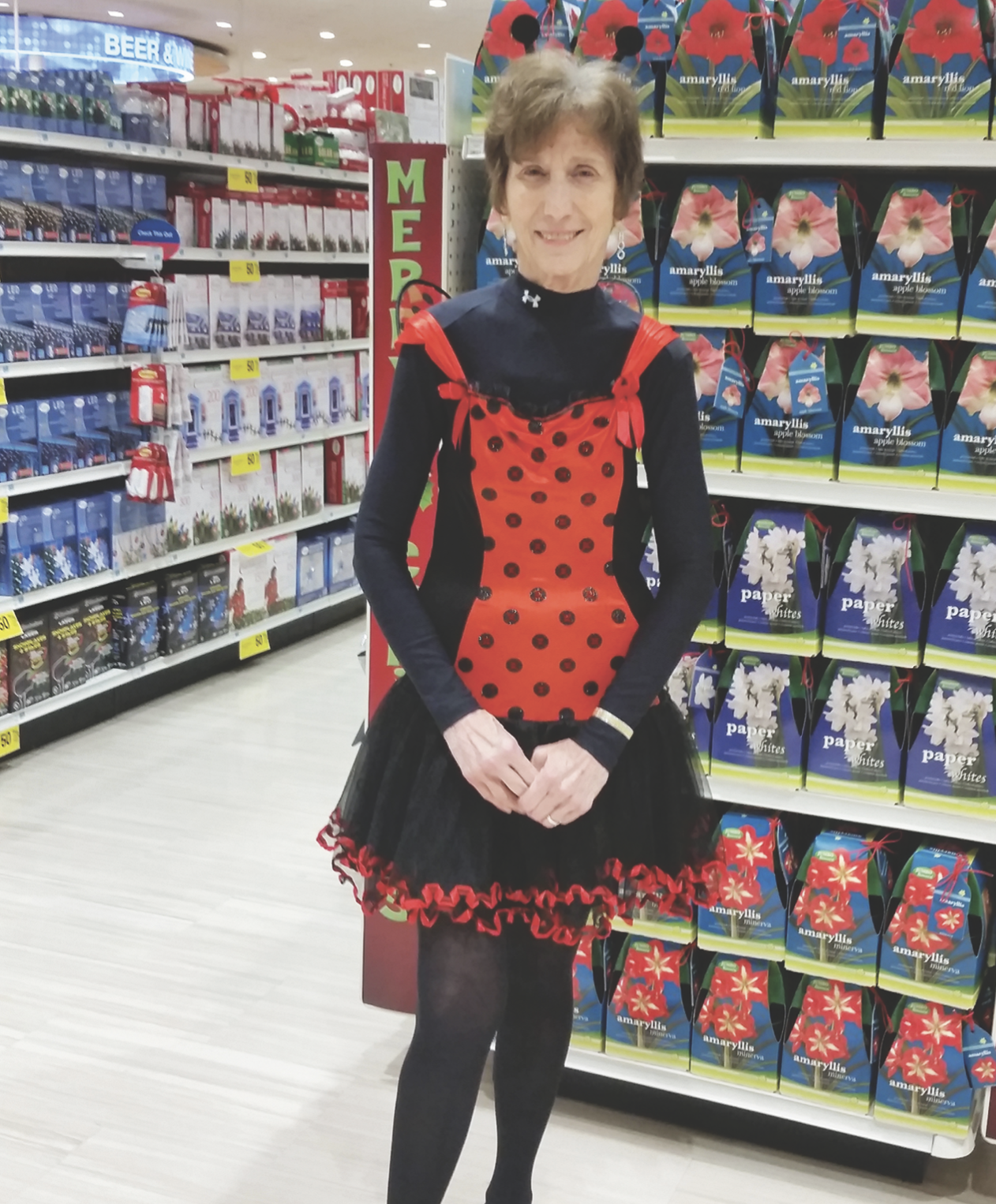 While we were still laughing, I put this question to Lola next (and she knows I’m the director of the Metaphysical Library): “Ok Lola, if you met a tourist from another planet, like an alien, what would you tell them about Earth?” Without chuckling, she answered frankly, “It’s a nice place. But you’ve got to be nice too! [The aliens.] And stay out of the sun! I think it’s a good place. It IS a good place, but right now it’s crappy because of all the stuff that’s going on. But next year’s going to be a better year, when all this gets over. All this MESS! It’s just sad. And I’m just glad that we’re all healthy, and I feel bad for the people that aren’t.”

“And it’s great how nice people are around here. Some of my customers are letting people stay in their homes, you know the fire victims and their families, to stay for a while until they find a new place. And as I’ve said; it’s how it’s supposed to be. I mean if all the countries could get together and help each other, we’d all be happier, don’t you think?! I mean if everybody would just help everybody. If you need food, let’s send you some food! I just think it should be that way, but it’s not. So, I guess we can change it, we can try.”

Jordan Pease is a 19-year resident of Ashland and Founder/Director of Rogue Valley Metaphysical Library and Media Exchange www.rvml.org

Rogue Valley Metaphysical Library & Media Exchange
Founded in Southern Oregon’s Rogue River Valley in 2002, RVML’s unique collection of books, audiobooks and DVDs has grown to be among the largest of its kind in the world. With emphasis on practical solutions to the world’s critical challenges, RVML’s mission is providing easy access to information that inspires, heals and transforms. An annual fee of $30 allows unlimited checkouts of materials on a variety of spiritual, paranormal and personal development subjects. In addition to the lending library, RVML also operates a media exchange where people can trade items on any subject at no cost. A donor-supported 501c3 non-profit organization, all donations are fully tax deductible. RVML also organizes periodic lecture and workshop events at venues around the Rogue Valley including the annual Architects of the New Paradigm conference series.
http://www.rvml.org
Post Views: 1,345