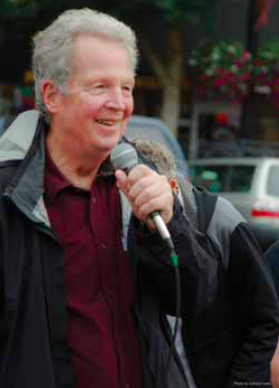 Great community leadership is born from an artistry in combining disparate talents and crafting them with vision, wisdom, dedication, and hard work. In this three-part interview series, former Ashland mayor John Stromberg talks about the quality of leadership that is required to make a city great. John talks about his philosophy and his experiences in city government following his twelve years leading the City Council, helping make Ashland such a quality place to live.

John and his wife Jane Stromberg have lived in Oregon for 35 years, and John served three terms as Ashland’s Mayor, 2008-2020, plus four years on the Planning Commission, and two years as Commission Chair. Prior to moving to Ashland from Eugene in 2000, he worked in the private sector for twenty years as an organization and management consultant. His major emphases were on enabling groups to work together more effectively, facilitating organizational change, and training workers to do highly complex jobs. He has a PhD in Business Administration and a Masters in Statistics from UC Berkeley, and a Bachelor’s degree in Physics from Caltech. He was recruited by the Economics Dept. of the RAND Corporation, where he did his dissertation on the “Internal Mechanisms of the Defense Budget Process.”

Thank you for doing this with me, John. What are three of your favorite things in the world? Looking back at my life I would have to say, number one is cars. My first dream at age three was about our family car. And at age 13, my parents let me buy a 1930 Packard for $15. Also, I love French vanilla ice cream. And the music of the 60s and 70s. Add teamwork; doing it or witnessing it in action.

Lastly, genuine magic, such as we have in Ashland.

Oh, one other thing I like is bumper stickers. When our kids were in a private school, I put two on the bumper of our Chevy Malibu wagon: “Great beer bellies are made, not born” and “This car protected by Rambo.” My favorite for Ashland is, “Don’t believe everything you think.” And for the Council, “Be worthy of our City workforce.”

Please describe the artistry of your work, in taking leadership in our community and conducting city business? First, educate yourself on what the City actually does. Second, accept the workload that goes with the job, day in and day out. Third, build relationships of honesty and trust with everyone. Fourth, recognize that Ashland has a ‘brand’ that can be used to our advantage, for example as a demonstration site for innovation. Fifth, recognize that quality of life is our strength because everyone who lives here wants to be here.

When I was eleven my parents bought their first car after WWII. It was a baby blue Hudson Hornet sedan with Twin H-Power and a Step-Down design. The most interesting thing about it (to me) was the salesman. Polite, no push, just talked to us. My whole family wondered; “How did he do that? Manage to sell the car?”

I realize now that was my first experience of art in social relationships. Sometimes in Council meetings I would wait for a pause, since pauses can be more ‘substantive’ than additional content. Helping the Council make up its collective mind was an important part of the Mayor’s job. I also had to learn to accept losing a vote and then to support the Council’s ultimate position. That’s also the art of letting things happen.

What is your idea of the true responsibility of leadership? I think the leadership of the City consists of the Mayor, The City Council, and the senior staff. The City Manager, Attorney, Department Heads, acting together. Together, they must discern the direction in which the City needs to be heading and communicate it to the community, the staff, and our partners in the region of the Rogue Valley.

The Mayor’s position is unusual in that she/he has almost no power that is not conditioned by the Council, but has entry to almost anyone who is involved with the City and its business. In that capacity, he/she can do important relationship-building that helps the collective of the City government live up to its capabilities.

How do you give voice to those who most need it? At certain times, for example, shortly after George Floyd was killed, I wrote a public statement and also signed on to President Obama’s Pledge “8 Can’t Wait” the day it came out I also spoke with APD Chief Tighe O’Meara to make that we were already working on the “8 Can’t Wait” actions, which the Ashland Police Department under his leadership has completed.

Jane and I and Pam Marsh attended one of the first workshops in the Rogue Valley on microaggressions and implicit bias. Also, earlier I attended the remarkable event “Unpacking Racism” at the Ashland Armory, which really deepened my understanding of prejudice against all groups experiencing discrimination both past and present: racial, LGBTQ+, women, and others. And I convened and informal small group of community leaders on the issues from the City, with HR Director and Councilor Dennis Slattery, Southern Oregon University, Oregon Shakespeare Festival, and La Clinica to establish relationships in anticipation of crises that might arise, so that we had someone to talk to informally about the difficulties and complexities that might come up.

Soon after being first elected, I visited the City of Eugene’s staff person associated with homelessness, who connected me with the Salvation Army (the City’s main partner in providing services to Eugene homeless individuals), and met with the founders of Safe Spots, Cahoots, and a nationally-known facility/program for people previously incarcerated, to help them reintegrate into society. A couple of years later, when Jackie and Jim Bachman had just come to Ashland, we went back to Eugene with them to follow up on our first visit. Now Jackie is on the Board of Options for Helping Residents of Ashland (OHRA) and Jim is on the Budget Committee. And, of course, I was Mayor when the Council first funded what is now the Ashland Resource Center and we expanded the 20-degree shelter into the extreme weather shelter program.

There are other social service programs in which the City participates or runs, like the Senior Center, winter and senior utility subsidies, Etc. And the recently disbanded ‘small grants’ programs. And, of course, our climate change efforts that have included the 10×20 Ordinance, the Climate and Energy Action Plan, wildfire prevention, forestry, smoke regulation, Etc.

As Mayor, I found it most relevant for me to get to know individuals involved with emerging issues that were not yet part of the City’s “essential services” but were very important in terms of the community’s values, in order to help their concerns and ideas to find their way into the Council’s decision-making process.

Also, I interviewed every person I appointed to every commission during the 12 years I was in office, except for the Climate Energy Action Committee, and to every ad hoc committee except the Budget Cost-Control Ad Hoc Committee Chaired by Councilor Dennis Slattery, who made the primary selection subject to my ascent. When I assumed the Mayor position, and had a responsibility to help the Council understand what citizens and staff were trying to communicate to them, would frequently do a pre-session meeting in my office with the citizens or staff, which usually started out with my question, “What are you trying to say, in simple terms?” And then figure out how to minimize jargon, and/or more clearly communicate complex ideas.

You have many years of experience in leadership, what’s your approach to dealing with the difficult situations that arise? To the extent I have an approach it’s this: 1) Take the urgency of the situation and make it my urgency as well. 2) Attempt to articulate the specific concerns of the aggrieved party or group – and then ask to be corrected. Persist until they confirm I understand exactly what’s wrong and why they are so upset. 3) Only when they confirm I get the problem from their point of view, ask what it will take to make things right and be prepared for a lengthy process to follow.

We are living in times when so many mistakes, faults, crimes etc. of our society must be remedied before we can move forward to fulfill the great promises and possibilities of democracy. Discrimination of every kind and the harm that is born out of it – all the way to genocide – is on the table. Equally, abuse of the environment and our fellow creatures on the planet.

The playwright, Christopher Fry, wrote, “Thank God our time is now when wrong comes up to meet us everywhere never to leave us till we take, the greatest stride of the soul man ever took. Affairs are now soul size, the enterprise is exploration unto God. Where are you making for? It takes so many thousand years to wake. But will you wake for pity’s sake?” Now, how do we do that…?

Rogue Valley Metaphysical Library & Media Exchange
Founded in Southern Oregon’s Rogue River Valley in 2002, RVML’s unique collection of books, audiobooks and DVDs has grown to be among the largest of its kind in the world. With emphasis on practical solutions to the world’s critical challenges, RVML’s mission is providing easy access to information that inspires, heals and transforms. An annual fee of $30 allows unlimited checkouts of materials on a variety of spiritual, paranormal and personal development subjects. In addition to the lending library, RVML also operates a media exchange where people can trade items on any subject at no cost. A donor-supported 501c3 non-profit organization, all donations are fully tax deductible. RVML also organizes periodic lecture and workshop events at venues around the Rogue Valley including the annual Architects of the New Paradigm conference series.
http://www.rvml.org
Post Views: 741