We all know the story of Beauty and the Beast. Originally told in 16th Century France, and capitalized on by Disney in 1991, is the story of a beauty with a pure heart and a beast with a secret to hide. As in any Disney classic good versus evil find eventual harmony in this happily ever after fairytale. What in the hell do fairytales and cars have anything to do with one another you scoff? Well, I am going to tell you. So, grab a cup of coffee and a doughnut, sit back, relax and I will tell you the story of a fairytale come true for a charismatic car collector and his legendary automobile.

Having made a name for itself in the early twenties, Bentley was a world renowned chassis builder. Back in those days cars were more or less custom built. You purchased a chassis from Bentley which was basically the engine, transmission, frame, wheels, brakes and tires and then you would have your favorite coach builder build the body. Generally, the body or coaches as it were, were hand built and very commonly wood was used throughout its construction. The Bentley chassis in this story originally carried a coach built by Gurney Nutting a company known for making sporting coupes. This coach however, was a saloon, British speak for sedan, and carried a wheel base of a whopping 12’ 6”. It was delivered on April 8th, 1927 to a very fortunate Mr. Rudolph DE Trafford of Lombard Street, London and carried a registration number of YF4648. In 1932, a gentleman by the name of Mr. C. Willis of Basingstoke took ownership of YF4648 and kept it until 1935.

Sadly, by the late thirties vintage Bentley’s were basically sold as scrap mostly due to their large 21” tires no longer being made, coach work not holding up to the test of time, and of course materials needed for the war effort. Fortunately for our draft dodging YF4648, it avoided becoming a British artillery round and found itself in the hands of Major Jack

Bailey. Major Jack loved to race cars and the Bentley needed some serious modifications to be competitive. So, the Major cut over two feet out of its wheel base, lowered the radiator, and added custom two-seat bodywork to the Bentley chassis. The original hot-rod was born.

Well, Major Jack was probably racing on the cheap as he used the YF4648 registration plates on his other racers and the registration was misplaced for a few decades. Fast forward to 1975 and the Bentley found a new owner by the name Mister B. Burnett. Burnett reunited the chassis with its original registration of YF4648 in 1983 and installed a Le Mans style touring body. The Bentley was then again sold to David Ayre shortly before Burnett’s passing and was registered to Ayre in 2008. It was in November of 2008 when our current owner Ron Rezek commissioned Ayre, to not only restore the Bentley, but upgrade it to as close to an authentic Bentley VDP 6 ½ Tourer as possible. In July of 2010 the restoration was complete.

Once in a while a truly special automobile graces my acquaintance and I am grateful for the pleasure. The Bentley was brought to our shop for a simple ignition repair and I became intoxicated with its beauty. No detail was spared to bring back to life this automobile and to morph into a true Le Man’s racer she should have always been. The massive 6.5 liter engine and its polished aluminum cylinder head and oil sump have me staring in awe. The linkage running throughout the engine bay controlling ignition timing and fuel mixture are plated in brilliant polished nickel. The tiny SU carburetors feeding this giant motor are trimmed with polished brass castings that look more like fine jewelry then an engines fuel metering device. From the leather covered leaf springs to the leather strapped bonnet to the custom made folding windscreen and hand built fuel tank this car was painstakingly restored to excellence. Even the engines flywheel was a spinning piece of art!

As with every car we work on a test drive is required and the Bentley was no exception. It was then she showed her true vintage lineage. The massive wheels have no power assist for steering and the mechanical brakes require true commitment bring the heavy vehicle to a stop. The transmission of that era lacked any synchromesh and up shifting was a delicate balance of vehicle speed and throttle control. I didn’t dare try to downshift. Of course the windscreen proved to be more ornate than screen and the 50 degree air was a little on the chilly side. So, in the end, the Bentley YF4648 VDP 6 ½ Le Man’s Tourer is a true beauty to behold, a rolling piece of museum quality art if you will, but she proved to be a real beast to drive. 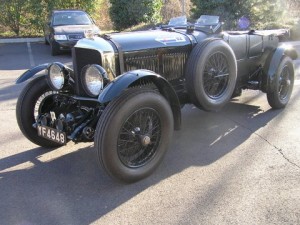