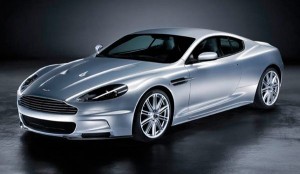 Do you remember a little car known as Herbie? Let me rattle your memory banks. Herbie was that cute, white, 1963 VW Bug, adorned with racing stripes and the number 53 and had a life of its own. Herbie, who was often seen winning races, battling villains, and even match-making, seemed to also get into all sorts of trouble all across the globe. Herbie’s mischief can be likened to that of Spongebob, where innocent intentions run amuck in the pursuit of loyalty, friendship and fun. Before I ramble on any further about Spongebob’s philosophical pursuits (thanks dad), the point I’m trying to make is Herbie was/is a movie star and few cars make it to star-power status. One of those few is a car that is heavily breathed on by “Q”, and “Q” is the mastermind for all of 007’s deadly toys. 007 is of course, James Bond, and Bond’s car of preference is the Aston Martin. Star power!

When a customer of mine recently inquired about a current model Aston Martin I decided to look up the marque’s history. It started like most European auto brands with one or two ambitious gentlemen with a dream. Throw in a few world wars, economic catastrophes, and continuous poor management and you have a cut and paste automotive docudrama. Aston Martin, founded by Lionel Martin and his buddy Robert Bamford in 1913, was name after Lionel’s favorite race “Aston Hill’, located in Aston Clinton, UK. I am always amused how an automotive company is named and “Aston” is no exception. Anyhow, I as mentioned before it seems like ambition always exceeds business prowess for these early startups and Aston Martin struggled along and had many ownership changes in its storied past. In the late forties, a gentleman by the name of Sir David Brown bought the company which was the birth of the “DB” series of Aston Martin. During Sir David’s reign, Aston Martin produced eight models which included the DB2, DB2/4, DB2/4 MKII, DB MKIII, DB4, DB5, DB6 and finally the DBS. In spite of the fact that all these models were successful cars the Aston Martin company still tanked.

Fortunately, by the early nineties Ford got a hold of the brand and turned things around for Aston Martin. They continued the “DB” branding and were so proud of their accomplishments they skipped the DB8 model all together and went straight to the DB9. Released in 2004, the DB9 was powered by a 470 horsepower, 6 liter V12 with plenty of beauty to back up that kind of brawn. Well, Ford managed Aston Martin well but failed to do so for their brand and had to sell off the company to save their own in late ’07. Yet again the famous marque changed hands but it seems it’s here to stay. Idolized by the boys from Top Gear and starring as 007’s faithful stallion the DB9 is here to stay and is a true movie star.