I can hear the music beat in my head “duh-dunt…….duh-dunt…….duh-dunt..dunt-dunt dunt dunt dunt”. Next the vision that will forever be etched in my mind of the hapless skinny dipper being ravage by a deep sea creature in Peter Benchley’s mega-hit movie “Jaws”. The star of this 1975 block-buster, a 25 foot Great White shark, terrorizes and devours anyone brave enough to swim its territorial feeding ground. The overgrown fish paralyzed the seaside resort town of Amity and fought valiantly and viciously to its death when pursued by three brave, but not-so savvy fishermen.  This movie kept me and millions of other beach goers dry-docked ever since. What you don’t know is there is a road going version of this killer in our midst and its pedigreed racing history and street prowess make it every bit as terrifying as Mr. Benchley’s menacing character. This killer built by BMW is badged 635CSi, but is affectionately known as the “Shark”.

About the time Steven Spielberg was yelling action and cut in the making of Jaws, Bavarian Motor Works (aka BMW) was also busy directing the design and replacement of its successful CS and CSL coupés.  The replacement car was the 6-series and its bodies were originally made by Karmann (remember the Karmann Ghia) but were later built in house at BMW. First production in 1976 included two models the 630CS and the 633CSi. The first was powered by a 3.0 liter carbureted 6 cylinder engine and the ladder was powered by a 3.3 liter fuel injected engine. Pay attention to the numerology in the model designation as it directly correlates to the car’s engine displacement. So, when the 635CSi was released it had, you guessed it, a 3.5 liter engine. The “i” in the model name designates the engine is fuel injected. The “C” represents coupe and how simple is that! Class dismissed.

The 6-Series had a successful run of twelve years and over eighty two thousand units were built and delivered worldwide. Not too shabby for a sports car that sold for over forty thousand dollars in the late 1980’s! To earn that high price tag, the late eighties models were pushing the “posh” envelope with leather covering every square millimeter of interior including the dash, headliner, center console, and door panels. The rear seat was even equipped with a beverage cooler! How’s that for German forward thinking. BMW’s 6-series earned many nick-names over the years including the “6”, “6er”, and of course, the “Shark”. Why the shark? Well, if look closely at the front of the car it will chillingly remind you of Peter Benchley’s horrifying character that terrified us on the silver screen. Some say that this semi-rare two door coupe is destined to be a classic. So collectors beware, if you buy one it will put a bite on you that will make your wallet bleed money like the red tides of Amity. 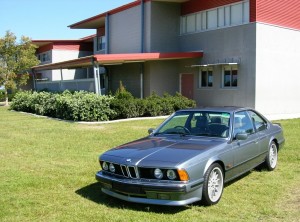 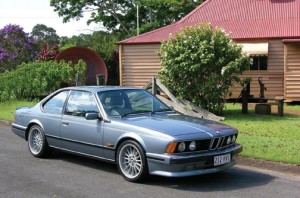