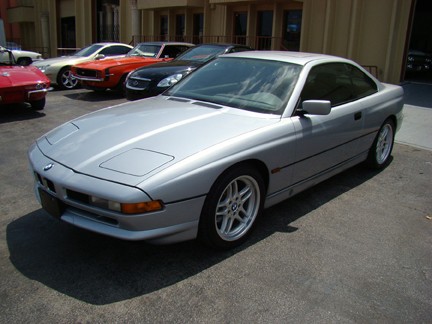 You may remember the article of the shark car. BMW’s venerable and classy 635csi, aka the “Shark”, had a successful run for a decade or so but was put to rest in 1989. That left a hole in BMW’s line-up and BMW enthusiasts had to look elsewhere to buy a sporty 2-door coupe. Of course, BMW not wanting their fans running off to Porsche to spend their hard earned cash, decided not only build a car that had 2 doors, but to build a car that would rival the likes of Ferrari. BMW decided to turn the global automotive world on its ear and build a car of epic proportions; they were going to build a supercar!

Design and construction of the car started in 1986, and the engineers made use of a state of the art tool CAD, or Computer Aided Design, which was unheard of at the time. Well, after spending about $1 Billion (2008 dollars) BMW came up with the 8-series that originally came with two engine options, one of which never made it to production. The first model was the 830i. It came with a 3.0 liter V8 engine and it was considered a prototype. I find this kind of strange because they actually built 18 cars before scrapping the model but, I guess the bean-counters at BMW wanted an entry level car. Fortunately, the powers that be at BMW insisted on a real engined supercar and in 1990 the 850i was released. The 850i had a 5.0 liter V12 that produced almost 300 horse power and had mountains of torque. It came with a manly 6-speed gear box or a civilized automatic transmission both of which were electronically speed limited to 155mph, which means the 850i could easily flirt with 200mph!

In 1993, BMW aficionados had a second choice of powerplant for their 8-series Beemer and that was the 4.0 liter V8. It was badged the 840ci and produced close to 300 horsepower. By 1993 the 850i was renamed 850ci and its V12 was bumped up to 330 horsepower by adding 400 more cubic centimeters. If all this power wasn’t enough for your well spent hundred grand, then you could have bought the 850csi which was massaged over by BMW’s “M” division and it produced close to a tire destroying 400 horsepower! The “M” division is BMW’s Motorsport department where their cars are tweaked and tuned to produce street legal race cars. What the “M” really stands for is money!

So what do all these horsepower numbers and engine sizes really mean? Nothing actually, all that you need to know about the 8-series BMW is that is a gorgeous car that is powerful and fast. With its lack of “B” pillars and svelte silhouette the 850’s design is unmistakable. Being that it carried a ridiculous price tag of close to $100,000 at the time of the First Gulf War and the overall global recession of the early 90’s, the 8-series did not sell too well. In fact only 31,062 units were sold worldwide which makes this car rare indeed. Only the brave will go out and buy one of these lovely cars not because they are expensive to purchase but they are expensive to maintain. Parts for them are as rare as the car itself and it shares only minimal parts of its BMW brethren. If you would like to see one of these rare beauties come by the shop in the near future as I can’t get its captivating silhouette out of my mind and I’m on the hunt…