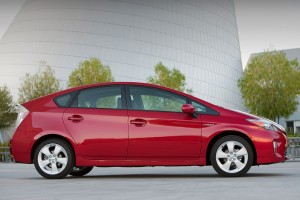 I’ve done my fair share of Prius bashing here on Car of the Month and maybe it’s time to analyze why I do so. It’s not that it is a bad car rather quite the contrary. Toyota spent a fortune on research and development of the Prius and it was under public scrutiny from the get go. And, being a new technology the Hybrid had to work and work well, as Toyota’s reputation was on the line. So, when the half battery, half engined little car rolled out of showroom floors across America onto open roads it proved it was reliable. It also got decent fuel economy as intended.

Of course, Toyota’s timing with the Prius couldn’t have been better. With global oil supplies dwindling and wars fought over the black stuff, it became chic to drive something that was high-tech and frugal at the pump. Movies stars were making a statement driving Prius’s so if it’s good enough for Brad Pitt, it must be a cool car to own.  Toyota hit a home run with the Prius. Reliable, economical, smart, utilitarian transportation and ownership automatically gave you a pass into the elite Hippy-Boomer Club. Quite frankly, as far as I’m concerned those are all the reasons not to own a car. Give me exotic, high horsepower, temperamental and a maintenance queen and that would describe a car I want to own. A car with a soul and a heartbeat not a whizz or a buzz.

Ok, I’m venting here so forgive me. The real reason I don’t like the Prius is it seems every “oh my god I can’t believe that person just did that” moment involved a Prius driver. Now, I know quite a few folks who own these cars and I’m sure they are all safe drivers but there must be a link between all those electrons and radio waves bombarding the driver that makes them have a lapse in driving judgment. My guess is the same people who are hyper sensitive to their homes “smart” electric meters and wireless routers are driving a Prius and have no business doing so. They should go buy a bicycle and stay off the internet. The bottom line is a car should have a soul and one battery and that’s to start it. All other batteries belong in a flashlight.