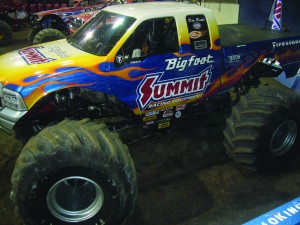 Everyone should have a guilty pleasure. Some take delight in a chunk of dark chocolate. Maybe it is an extra shot in your already heavily caffeinated latté or a pint of Ben and Jerry’s. It might not be food at all! It may be snuggling up to a trashy novel filled with the stories of vampires staying out till the twilight hours or spending too many hours networking on Facebook. I have met quite a few who have publicly scorned the idiot box but secretly desire to surf its channels. My guilty pleasure you may wonder? Watching a 10,000 pound truck that is as tall as a house, with more horsepower then 10 VW Beetles, jump a dirt ramp, fly ten feet in the air using used up junk cars as a landing pad. Yes, ladies and gentleman my guilty pleasure is watching a monster truck wheelie like a motorcycle and pummel cars like a kid smashing his hotwheels with a hammer
(I used to do that too).

If you are going to watch a monster truck show, why not watch “BIGFOOT” the godfather of this high intellect sport! In the early seventies, Bob Chandler built a custom truck to market his new off-road 4×4 specialty shop. It started with his personal Ford F-250 that was accessorized with all the aftermarket parts his business sold. As it evolved it became taller and the wheels got bigger. Then as a joke Chandler thought it would be fun to try and drive his big truck over some junk cars while shooting a video of the carnage. A motorsports promoter caught site of this video and convinced Chandler to crush a few cars in front of a live audience. He obliged and it became a huge success which grew into what is affectionately known as the pro-wrestling of motorsports. Monster trucks with fearsome names like Big Foot, Bear Foot, Grave Digger, Equalizer, and King Krunch to name a few have smashed hapless cars all around the globe with hundreds of thousands cheering them on. Its pioneer Chandler and his truck Bigfoot have been laughing all the way to bank!!!

When I heard on the radio that thee Bigfoot was going to be crushing useless iron in our very own Rouge Valley I about blew a gasket. I went to my local NAPA Auto Parts store bought some tickets to the event and begged my wife and kids to go with me. Armed with ear protection and lots of $20’s for Monster food and paraphernalia we headed to Jackson County fairgrounds. In a dirt floored arena where usually cattle or dogs earn best in show sat six gigantic, no, Monster trucks ready to pound there sacrificial cars adorned in flat white paint. And pound they did. Their thunderous 1000+ horsepower engines launched their 10,000 pound chassis and driver into the air and mercilessly squashed the cars beneath them. I and every man, woman and child in that place had a smile on their face. It was pure grassroots entertainment. Check your middle class attitudes at the door. After the event I talked to some people whom you would not expect to see at a Monster Truck event confessed to me of enjoying the show. These are the same people who secretly love TV. 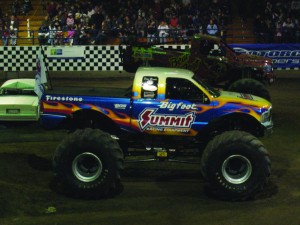 The Avalon Bar and Grill

What is Plein Air Music?