Y2K. Remember the big scare of the turn of this century. Computer hard drives were going to crash, airplanes were going to fall from the sky, food and water couldn’t be purchased because of some wacky bar code that couldn’t be scanned and bank accounts were going to suddenly disappear overnight. I remember waking up on January 1, 2000 and much to my dismay all was normal. My TV worked, my clock still displayed the time, and oddly enough I was able to check my email. Everything seemed okay except for one thing. The automobile manufacture that produced the original Mini would cease production of a car that was as popular to Britain as the Volkswagen Beetle was to America.

I’m sure most of you have seen those cute new MINI’s zipping around with multi-color paint jobs and bug eye headlights. What you may not know is this cute little car was designed and engineered by BMW. For those of you who are really young or could care less about automobile history this MINI was based on a post World War II British built econo-box. After the war Britain was feeling the pinch of fuel rationing (like we don’t know what that’s like) and they needed an economical car for the masses. So, a couple of brilliant engineers from the British Motor Corporation sketched out a 10 box and literally designed a car to fit in that box. They raised a pint of warm Ale to their success and called it the Mini.

During the history of the Mini its parent company British Motor Corporation merged and split with so many other British car builders it is hard to figure out who actually built the car (maybe some of you readers can enlighten me). What I do know is BMW obtained the rights to the Mini in 2000 and decided have a go with the car. BMW in all its prowess decided to change the name of the Mini. So what they did was use upper case letters in its new name M-I-N-I. How’s that for rocket science! They should have asked a fifth grader to name the bloody car! Anyhow, as with any BMW and all branding aside, the car is truly amazing. I think they hit the “retro” look spot on and the car performs as a perfectly balanced sports car should. It has just enough power to make it exciting, handles like a go-cart and actually has quite the roomy interior. When driving the car it feels like you are in the cockpit of a plane as opposed to a 4-wheeled transportation device.

This MINI spied here in Ashland looks like the victim of a high school prank. Non the less it’s all MINI, German engineered and British built. The US spec base MINI has a 1.6 liter engine and if you need a little more zing the MINI S has a supercharger (the 2007 MINI S in now turbo charged ) which is the one I prefer. I have a few MINI customers and they love their car as much as we do. They are unique and a pleasure to work on. So, if you find yourself driving a MINI up the curvy road of Highway 66 on your way to Hyatt Lake you’ll only then understand the true meaning Austin Powers “Oh Yeah Baby!” 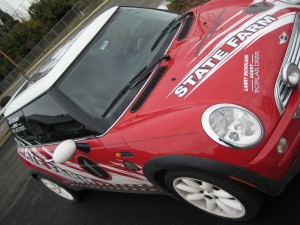 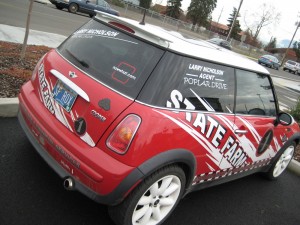